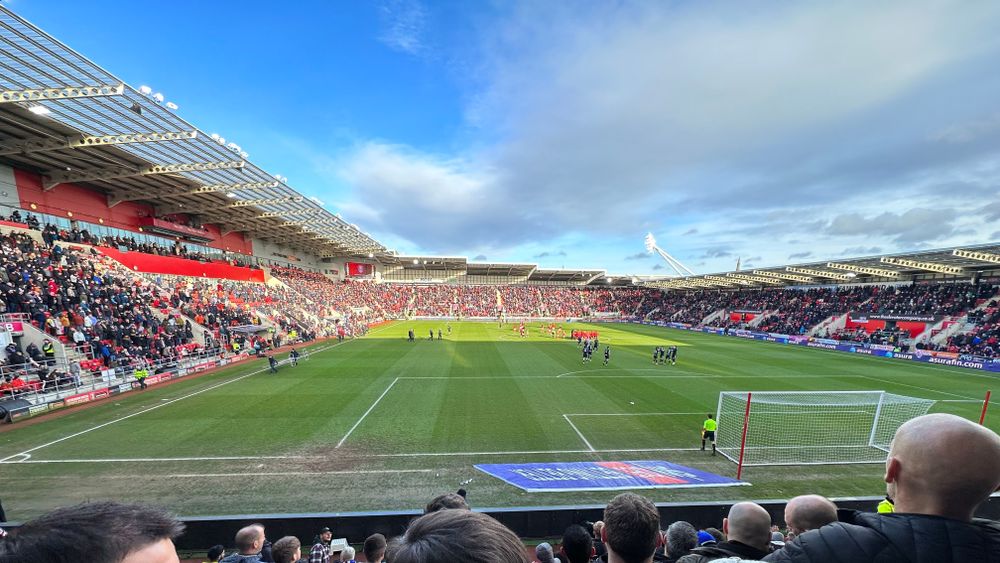 The roll was fresh, smeared with a pot of tomato chutney and loaded with four rashers of thick-sliced, lean bacon, all enhanced with a flavoursome hash brown. The latte was decidedly full-bodied and after consuming same, all appeared well with the world. It was now 11am and that was pretty much as good as Saturday would get...

Meeting fellow Rovers fans for a brunch (frightfully middle-class..!) before the encounter (or should that be surrender ?) with Rotherham United today was great fun. Exchanging opinions, hopes, aspirations and one or two concerns is all part of my preferred formula for matchdays these days. The game itself often plays second billing to the surrounding activity...after a performance and result like today's it's perhaps just as well.

All the classic Rovers warning klaxons were sounding - playing the side bottom of the league - check; a side that can't win at home - check; opponents who are bottom of the current form table - check; the nemesis of Rovers fans the Second Tier podcast even predicted us to win - sometimes the script really does write itself.

Context is everything of course; so let's get the obvious out of the way - Rovers summer turmoil was significant, any incoming regime (not solely the manager) therefore needs time. The current league position is way higher than anyone with Rovers in their heart could realistically have predicted and yet...

The wheels properly fell off against Burnley and despite positive results against Norwich and Cardiff the spectre of the Clarets  and Preston performances loomed large over December and the north-eastern foes of Sunderland and Middlesbrough capitalised with 2-1 victories.

Any hope that league form could be rekindled at the New York - so named fact fans - after the district of the town that was once home to "Guest and Chrimes", the company which occupied the site for nearly 150 years and famously made the red fire hydrants that are still dotted around the streets of America’s New York City - lasted about 32 seconds. After 33, the Millers took the lead and once again, Rovers had no answer to going behind.

Instead, Rovers continued to play from the back; slow, short, sideways - presumably with the intent of enticing the Rotherham defence forward and creating space to exploit behind the Millers’ back line. The only problem was that Rovers couldn't find the right combination of accurate pass & timely move. Rotherham started the second half as they did the first by scoring early and that was that. To add further injury to insult, two additional goals emphatically emphasised Rovers defensive incoherence and attacking impotence.

The failures on display today seemed endemic and highlighted much of what was seen against Burnley & Preston. Four goals conceded twice in just the last six league games (plus Forest in the Carabao of course), leaves Rovers 18th in the six game current form table. In the words of popular 70's new wave combo “The Stranglers” - we need to Get A Grip and Something Better Change. #OneForTheTeenagers