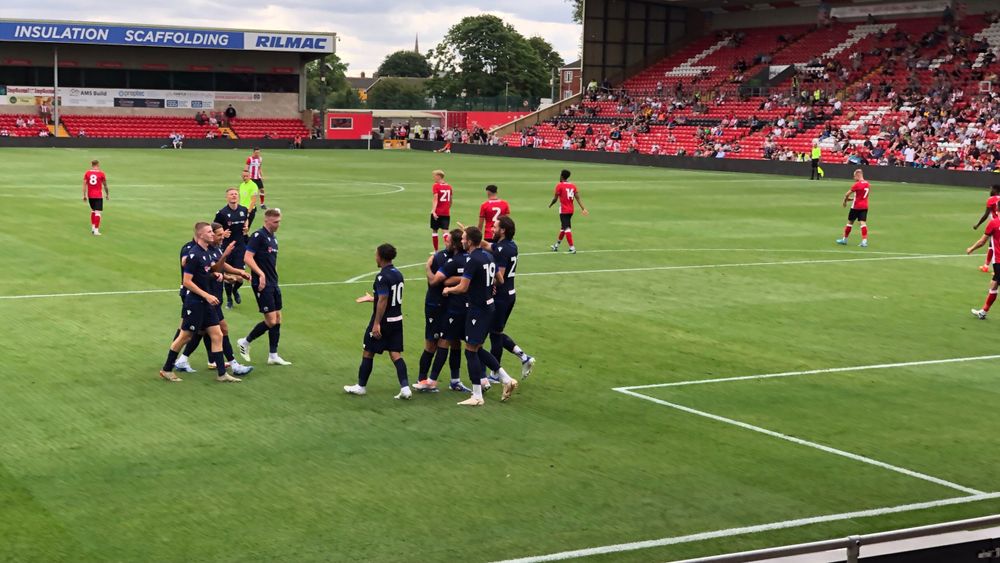 It’s called “Steep Hill” and if ever a street was named accurately, then this one certainly delivers what it suggests.

A climb that tests the calves and the grips on your footwear in equal measure opens up to reveal a castle on one side and a magnificent cathedral on the other. Looking back towards the city you have a view normally reserved for pilots of light aircraft, balloonists or hang gliders.

This piece isn’t sponsored by Lincoln’s tourist board but there is something about an away day that offers a chance to take in local surroundings and enjoy more than simply 90 minutes of football. The hazy sunshine kept you cosy warm, the open-air tables were busy, the whole vibe welcomed you in like your favourite aunty, making you feel comfortable and relaxed.

At the ground, the stewards seemed genuinely pleased to see away fans and the pitch was truly magnificent. It seemed as if each blade of grass had been sowed in a regimented series of columns and rows to provide a grid of definitive Lincoln Green.

On this magnificent carpet of agricultural Axminster, Rovers went about their business seeking to feel the force ahead of the real thing next week. The first half was somewhat sloppy, with defensive errors not punished, whilst in attack, Hedges & Brereton-Diaz contrived to be flagged for breaching rules more frequently than a prime minister in a select committee. Has the offside rule been suspended in previous friendlies this summer? The referee’s assistant was treated for RSI at one point I swear.

The introduction of new-signing Brittain suggested a new threat down Rovers right and the first beneficiary of delivery to which Yodel can only aspire was Bradley Dack. If ever a player needed and deserved some reward, then Bradley fits the bill. The goal was warmly received by the travelling support who licked their lips in anticipation of more. That no more arrived was partly due to the offside issue, a lack of cutting-edge and in the case of a lovely Hedges strike, the crossbar being about 10cm too low.

There were some impressive performances from several Rovers youngsters; Adam Wharton looks like a street footballer who wants to tackle, nutmeg and outrun every opponent, Phillips is cool and composed (but remains unsigned it should be noted) and a lovely cameo from Jared Harlock showed composure, vision and technique that really caught the eye.

Results don’t matter in pre-season, performances do but fitness is perhaps the key objective. To that end, it was a decent workout, some raw edges but all in all a rather pleasant way to spend a balmy summer’s day.

Hopefully JDT will have learned all he needs and now has enough data and video evidence to name a team capable of at least holding its own next week. Still think we need at least three more players though…

Visit Lincoln, you’ll love it ! (Is that OK City of Lincoln Tourist Board?)