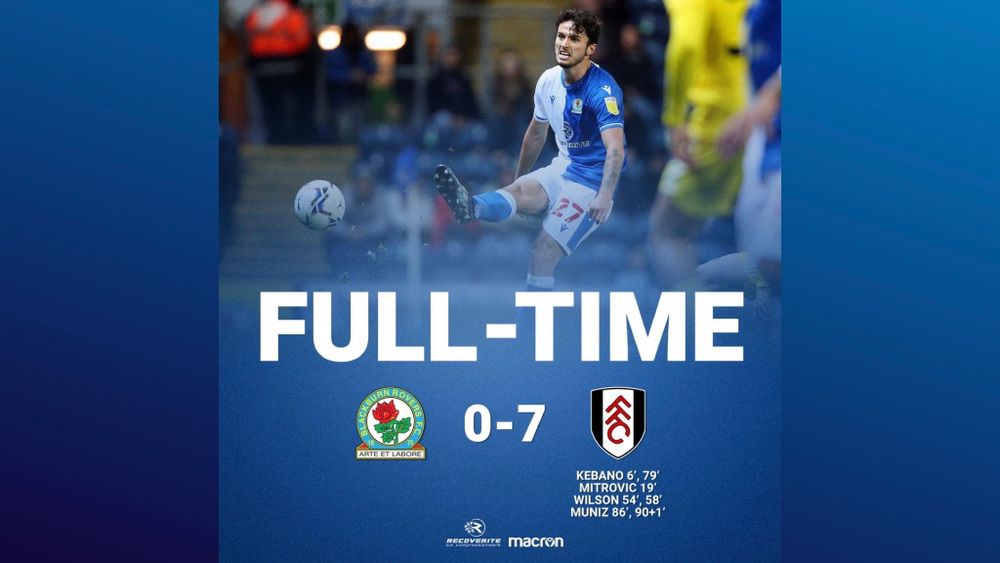 Blackburn Rovers ship 7 and I just don't seem to care

It seems strange to think I was writing a reflective blog recently about 'right hammerings' that my Blackburn Rovers have inflicted on other teams,

Just like we did when we beat Cardiff City 5-1.

Last night I witnessed the absolute horror show of the worst defeat I've ever seen.

I have seen us ship seven before, just once, at Old Trafford in 2012, but we at least got a consolation.

The previous heaviest home defeat was being tonked 5-1 at home by Dmitri Payet's West Ham in a cup tie in 2016 (I mentioned this recently as one of the best 3 all time performances against us by an individual player).

All of those experiences were painful, embarrassing, excruciating. There have been other occasions where I've wanted the referee to stop the game on a technical knockout.

But last night seemed far worse and left me feeling far emptier than I did after any of the others. Do you know why?

I don't think I care any more.

Before the game we were 7th with a positive goal difference.

If we'd lost 1-0 or 10-0 it's still no points and we aren't anywhere near good enough to push for promotion. The whole structure of English football is such that a team like Fulham who were comfortably relegated last season are now seen as a level above every other team in this division, save the ones who also came down.

Suppose by some trick of fate this squad of Rovers players edged into sixth spot in May next year. Then in the heat of the play offs managed to grind out a 1-0 against, say, West Brom, then took a trip to Wembley for an emotional collision with Huddersfield, maybe, who then bottle the big occasion and have a poor refereeing decision go against them in the 92nd minute of normal time. Dack scores the penalty and we're promoted.

Now imagine that side facing any team in the Premier League.

Fulham strolled to that 7-0 last night. A team that has been beaten by Reading, Blackpool and Coventry.

They are a good side, but the whole approach seemed to be to treat them like Ajax of 1972, or Barcelona of 2009.

Once again I was left confused by this diamond midfield with John Buckley at the tip of it, and Bradley Johnson in front of the back four.

It's nonsense, isn't it?

And we've been here before. Lining up at home to match the way the opposition play. It didn't even work against Fleetwood Town in League One. So it won't against a better team, with cleverer players, who can pass the ball, who have the ability to just change their plan in midflow.

Mowbray sets his teams up to outsmart the opposition. But he'd be better off trying to play to our strengths and get the basics right.

Don't give the ball away.

Mark their striker at a corner.

Defend a lead by keeping the ball in the opposition's half. Just as Fulham did.

And don't wrestle a player to the ground and knee him in the head.

One of the other predictable things about a bad spell at Blackburn Rovers is the fans turning on each other.

I stay off Rovers social media, but when I do peep-a-look it's basically Leave and Remain all over again.

Both kind of miss the point, if I'm honest.

The one thing the whole club lacks is momentum. What is the objective? What is the strategy to meet that objective? And what are the tactics that we can relate to?

If it's survival, then say so. To find the best futures for these gifted young players, then so be it.

But can you honestly make a case to persuade a young amitious player that staying at Blackburn Rovers will be good for your career?

Every aspect of the club seems to be adrift. I genuinely like every player in that team. I will forever be grateful to Tony Mowbray and think he's a good man. But what I think doesn't matter.

What I feel matters, to me; and I feel empty. I feel as empty and lacking enthusiasm as the thousands of people who call themselves Rovers fans, but don't go.

If you look at the size of the crowds, the amateurish promotional offers, the lack of commercial partnerships, then you can see why the ambition of the fans and the players has waned. With the exception of Brereton mania, it's gone.

I always wanted to be part of something. It's at the heart of what being a fan is all about.

This isn't an overeaction to a terrible performance. It's a really slow death of a football club.