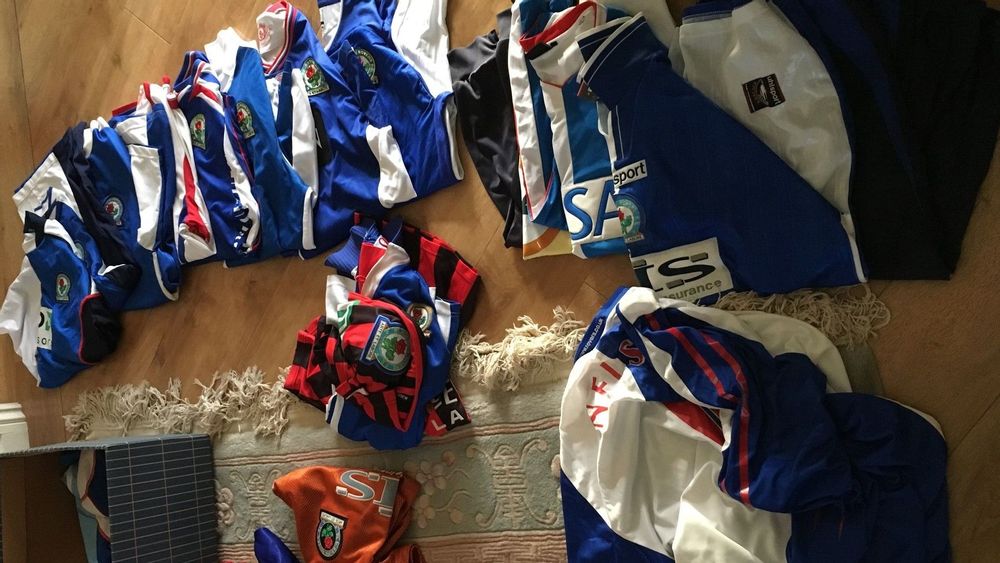 I was in Blackburn Royal Infirmary, I’d just come round from the anaesthetic after the latest in a series of childhood operations that meant I was on first name terms with all the nurses on the childrens’ ward and the question was posed….

“Is there anything you fancy love?”

Now, my mum was probably expecting an answer along the lines of a chocolate bar, maybe an ice cream; after all I’d just had my adenoids removed and ice cream was recommended as a soothing post-operative treat.

I asked for a football kit. Not a shirt. No a kit… a full kit. I know.

I already had a Rovers shirt and a plain red shirt which could function as Liverpool, Man Utd, Swindon Town but when I wore it, I was Blackburn Rovers away from home, playing a team in blue or white. I’m not entirely sure I’d fully grasped the league structure so in my imagination I kicked a ball around in red as Rovers were away to Everton, Chelsea or Leeds.

That was the thing then, just two or three plain shirts, blue, white & red say, would enable me to play out my own fantasy league encounters including three-quarters of the league and beyond.

Plain white sir? Why today I shall be England in qualification for the 1974 World Cup in West Germany.

Sir looks dashing in blue…then today I shall be Everton at home to Liverpool in a crucial Merseyside derby…commentated upon by Gerald Sinstadt. ALWAYS Gerald if it was two north west clubs; Brian Moore if I was being Chelsea or Rovers were away in London; David Coleman when I fancied a change or I scored the first goal….

“ONE NIL…” in his distinctive timbre. Clear as day in my memory even today.

I had a wallchart/map called The Football History Map of England & Wales on my wall…approved by the Football Association no less…how I wish I still had it.

All the badges, some basic facts like ground names but it had the kits…all of them and clearly showed the location of all the clubs. I would NEVER be caught out by the pub quiz question :-

“Which club hails from Burslem?”

Partly because I was seven years old and didn't go in pubs, partly because pub quizzes hadn’t yet been invented but mainly because I learnt them all including the whereabouts of Port Vale.

I would sit there staring… Darlington… Feethams / white with black hoops around the chest… I wonder if Gibsons stock that one ?

Go to www.historicalkits.co.uk and feast your eyes…

I loved the shade of blue that Bury used and the fact they wore blue socks. I adored Man City’s red & black away shirt and when they brought out the Thunderbirds kits, well I was transported to heaven.

City also had a white version with red & blue bands and when Malcolm Allison decamped to go to Crystal Palace, he took the kit with him (and so kids, THAT’s why Palace favour that combination as an occasional home or away kit today.)

The blue one though, oh joy, oh ecstasy, numbers on the sleeves as well. (Birthday present in 1972 as it goes.)

The thing was then, a kit was reasonably priced. It was a free market, any company could have a go at producing them. Everyone knows Umbro, Bukta… perhaps Gola, what about Mileta, Litesome (big in cricket sector as well) ?

The short sleeved, badged, proper replica exception in my collection was one I fell in love with after seeing it on TV in COLOUR… glorious full COLOUR. I was taken to a “posh” friend of the family to watch the 1971 FA Cup final because they had just taken delivery of a COLOUR TV! Imagine the shock to discover that Liverpool’s scarlet kit was magnificent, the green turf resplendent… but that Arsenal kit… oh boy…THAT burned into my retinas. I didn’t care for these clubs particularly, I just loved their kits.

The next week the Arsenal kit was in the window of Gibsons on Blackburn Road, Accrington. Well it was for a short while, because I had savings and I was going to spend. I wore that shirt until it fell apart in the washing machine, wrecked by a combination of 1970’s twin tub technology (ask your gran kids) and Daz probably. I had my money’s worth though.

Portsmouth had lovely red & white trim on their shirt collars, cuffs, shorts and socks. They’d made an effort, least said about Leeds Utd the better…although that was soon to change and they were at the very forefront of the incoming kit revolution with their partnership with Admiral who would rewrite the industry rules.

I stopped* buying shirts when I retired from regular 5 a side about 7 or 8 years ago. I have neither the physique to carry one off nor frankly the savings these days. I read last week that a full kid’s Man Utd kit, suitably named, numbered and badged up costs more than a season ticket at Bayern Munich. How have we let this happen? Get a grip people, rebel – buy last season’s when it’s discounted by 70%, buy a classic, timeless COTTON (ah… joy) retro.

Don’t fall victim to the marketing departments…YOU are better than that.

Though I am not. I blame World Cup fever… THAT Peru* away shirt though, gorgeous, whatever… I succumbed and now justify it by wearing it down the gym.

Help me please… I LOVE football kits, but I do need help.