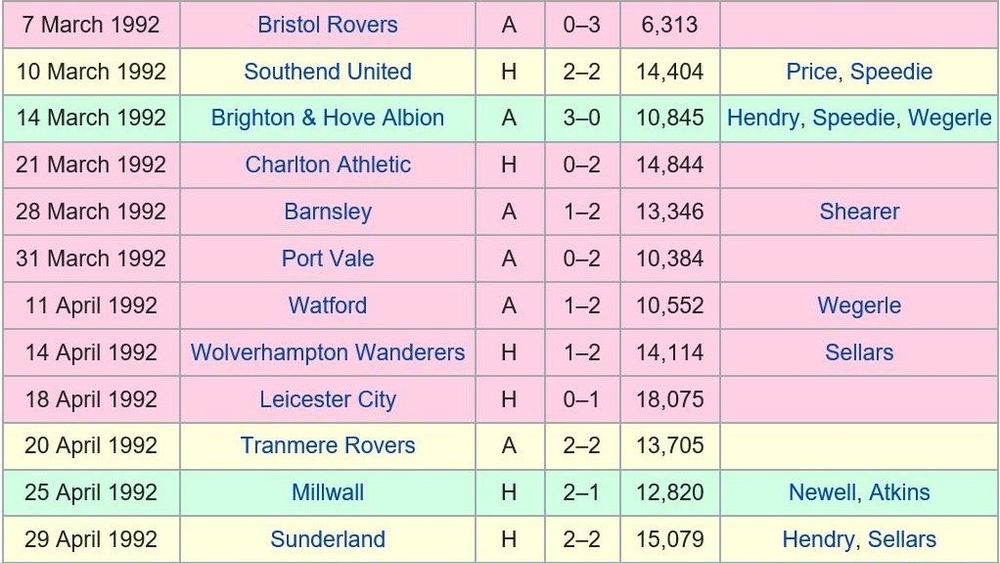 Rovers travelled to bottom-of-the-table Port Vale on 31st March 1992 during an infamous run of six successive defeats. Here’s a lovely rant about that match from Issue 17 of 4,000 Holes (the author is not stated in the original article).

Can there be any other supporters anywhere who have to suffer as we do? So often so close yet inevitably our season ends in tatters. This season’s impending disaster is made worse by the high-profile status we have been given. It’s been expected by friend and foe alike that Kenny Dalglish and the chequebook would achieve Premier League status without trying. Not to do so would be unthinkable, even amongst the most cautious of us. This surely was going to be the time ‘those pearly gates opened up!’

At the time of writing this I was still wallowing in self-pity and disbelief at the events of Vale Park. Things may improve and this may all become senseless rantings of a born cynic. I am a realist, being a Rovers supporter makes you that if nothing else, and at present this team deserves absolutely nothing.

Port Vale showed us all just how shallow our once-certain challenge has become. They beat us with consummate ease and left us shaking our heads in disbelief. It’s happened again, hasn’t it? Why does it always have to go wrong for us every bloody time? Is the good lord a Burnley fan? Were we all mass murderers in a previous life? If the German national team pulled on blue and white halves, they would be lucky to make the play-offs.

“It’s all gone horribly wrong,” said one bemused fan who was standing behind me. The support was brilliant and what did we get in return – a complete stuffing from the bottom club. Thank God for Bobby Mimms – it would have been much worse! If the useless gits tried half as hard as we the fans do, we would already be promoted.

I don’t want to apportion blame, this was a way of letting-off steam, not starting a witch-hunt. But doesn’t this dramatic loss of form beg some questions?

Is Dalglish worth his obscene salary? Do you think his heart ever left Anfield? How many players show the honest commitment, the stomach for a fight that might mean there is still hope? Can you remember such a tactically inept team that crosses from the halfway line to forwards with immense talent in their feet? One that bypasses midfield because no one thought to buy players to put there. Why do we persist in playing men who week-in week-out turn in bad performances? How can Kevin Moran be on the substitutes’ bench when Keith Hill is out there giving goals away for fun?

I didn’t intend to single any individual out, but enough is enough. I do feel an ounce of sympathy towards Tim Sherwood; he was booed on at Port Vale and with every subsequent touch of the ball was jeered mercilessly – what chance has he got?

Duncan Shearer is a class act, strong and direct. He will be a good buy – shame no one thought of passing to him. Roy Wegerle (or Wedgerley as he was announced over the tannoy) looks like a luxury we don’t need just now.

If (or when) this season ends in disaster, it’s us who will have to live with it, to take the stick and pick up the pieces of out shattered ‘hopes’ – the players will still collect their fat pay packets. How many of them care about us????