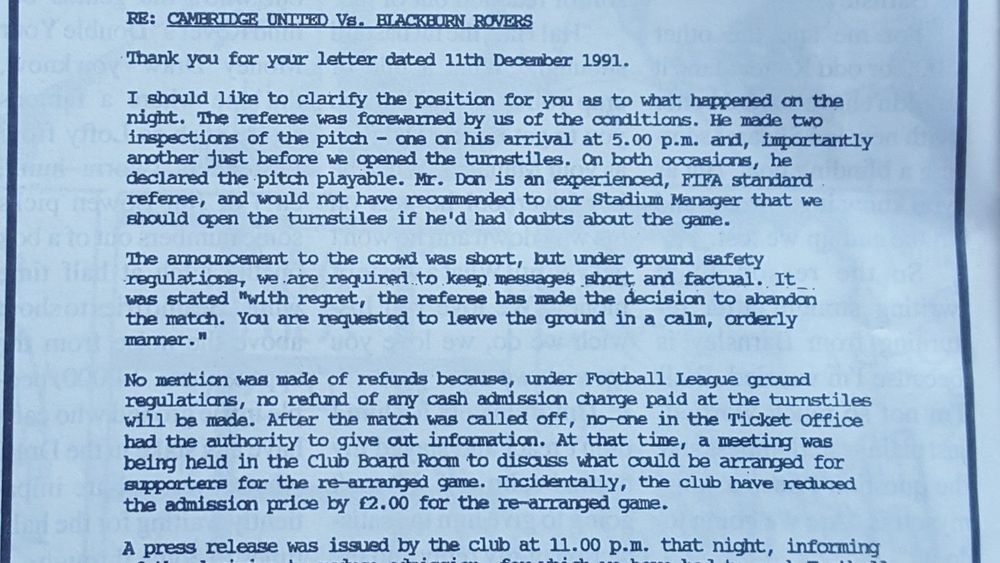 Just Who Are They Trying To Fool?

It is Tuesday 10th December 1991 and Cambridge United sit at the top of the Second Division two points ahead of Rovers in third place. The teams are due to play each other at the Abbey Stadium with Rovers needing a win to go top for the first time this season. This is an important game which is bound to attract a large away following from Blackburn.

We awake to find that heavy frost and freezing temperatures are affecting the whole country and freezing fog is causing horrendous accidents on the A1 and M62 with the police requesting that drivers only make essential journeys. A midday phone call to Cambridge United gives a conversation with a very helpful lady who announces that the pitch is perfectly playable and gives excellent directions on how to reach the ground and where to park.

So we set off for Cambridge listening to the radio expecting to hear at any minute that the game is postponed. At three o’clock another phone call to Cambridge gives the same response that the pitch is OK, so the long and difficult journey continues following diversions set up by the police following accidents on the motorway. Surely this game will be postponed?

At five o’clock there is still no news of a postponement so a call to the Abbey Stadium gets a recorded message saying that the game is definitely going ahead. 5:30pm and another telephone call to Cambridge United. “The referee hasn’t arrived yet, but as far as we are concerned, the pitch is playable,” is the response from the helpful lady. 7:15pm and we get out the car onto a grass car park which is frozen solid, walk to the ground and see a pitch frozen resembling the surface at the Blackburn Arena.

The match kicks off and inside 20 minutes two players are injured due to the state of the pitch. At 8:20pm, Rovers fans are still arriving to watch their ten minutes of pantomime on ice (which cost £10 for a seat) only to hear the referee abandon the match at the start of the second half.

The next day we read the papers and discover that at five o’clock the referee inspected the pitch and found it playable – this was half and hour before he had arrived according to the ‘helpful lady’ on the phone!

By my estimate about 1000 to 1500 Rovers fans had made the journey to Cambridge on that Tuesday and paid say £10,000 in entrance money aside from the travelling costs. Just who are Cambridge United trying to fool? The pitch should have been inspected far earlier by a local referee who should have realised that large numbers of fans would be travelling and that the likelihood of the match being completed was slim.

More importantly, 1000 to 1500 fans would have been saved a difficult and dangerous journey in terrible weather conditions. In my own mind I am certain that we have been ripped off by Cambridge United, who must have realised that the chances of postponement or abandonment were high, and looked at the possibility of starting this game, taking our money and very likely getting us all back again in the spring to pay again for the dubious pleasure of visiting the Abbey Stadium.

Shortly after the game was abandoned, I overheard a radio conversation between the police and Cambridge officials that as Cambridge United had incurred all the costs of staging the match, no refunds were possible. Surely the club could have used a little common sense and requested an early postponement. Shouldn’t the local police have considered ordering the same? As we hear more and more about the need to make grounds safe for fans, should the Football League or FA issue guidelines concerning the postponement of matches when weather conditions are so poor?

Once again the fans are the last people to be considered, yet we are the people that keep the game alive. There does not seem to have been any consideration of the costs and difficulties faced by the fans at this time.

Another supporter, Chris Wilkin, penned a letter to Cambridge at 4am on the Wednesday morning “just after getting home from the worst car trip the four of us who went have ever endured.”  The reply from the club is below… 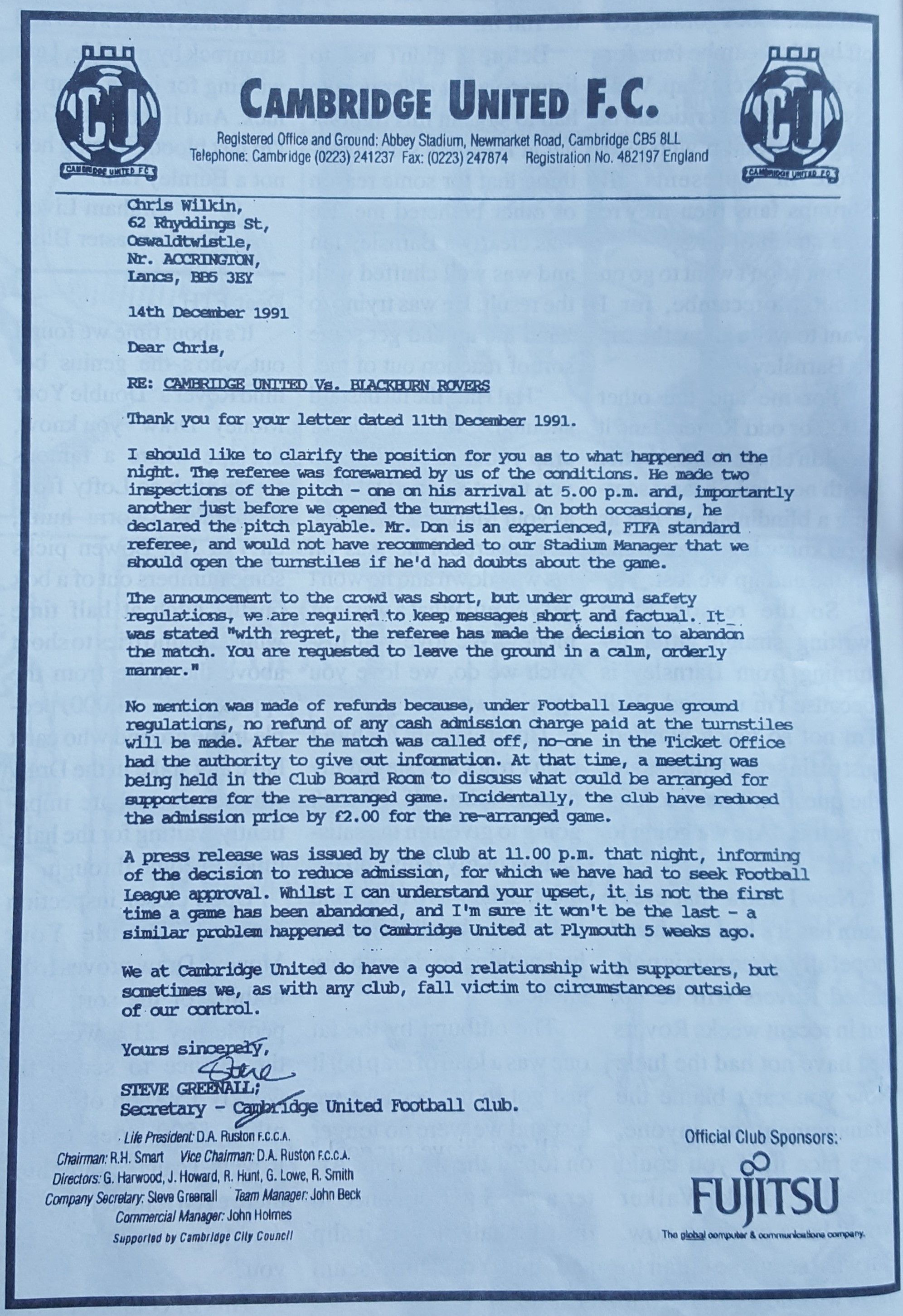