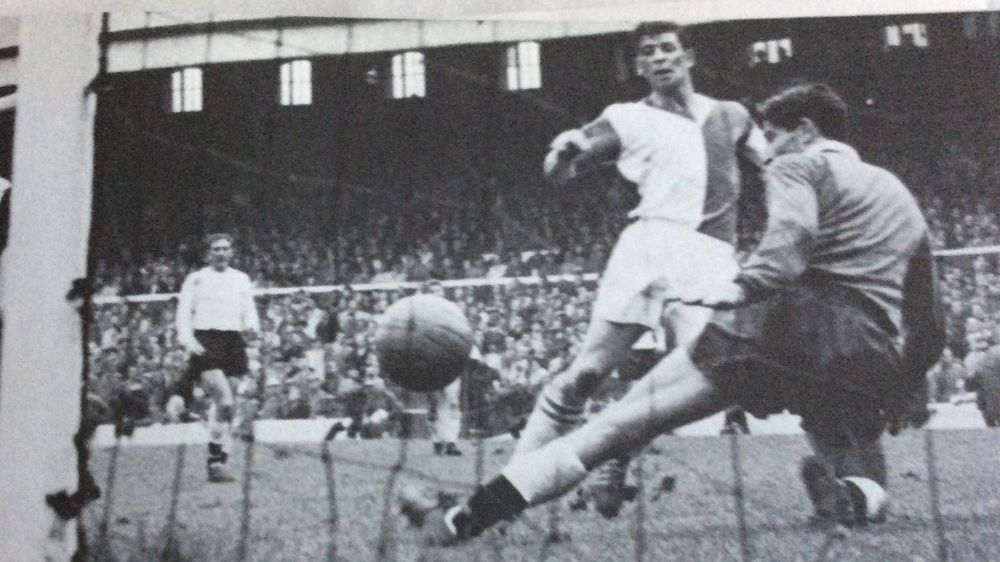 At the height of his goal scoring prowess Andy McEvoy was once asked by a reporter for the secret of his success, to which, in his understated way, he replied "being in the right place at the right time." This response was typical of the quiet Irishman, who, as a player, never courted success or celebrity.

He was shy and retiring which even transferred itself to the pitch. I don't believe I ever saw Andy celebrate after scoring but rather he took the congratulations of his teammates and the adulation of the crowd and then, head down, trotted back to the centre circle.

It was as a youngster playing for Bray Wanderers in Ireland that he caught the eye of then Rovers manager Johnny Carey and it was he who persuaded and signed the young McEvoy in 1956. Things, however, didn't run smoothly as the youngster prevaricated and then changed his mind about leaving his beloved Ireland. It was some eight months later that Andy McEvoy finally arrived at Ewood Park accompanied by Mr Carey who, not for the first or last time, had to journey to Dublin, to escort the youngster back to the club.

Repeated bouts of homesickness bedevilled the young Irishman but with gentle persuasion from Mr Carey he always returned. Deployed as a wing half and, on occasions, as an inside forward, Andy McEvoy spent his early Rovers career playing in the reserves in the Central League. He was solid rather than spectacular, unobtrusive rather than dominant but he possessed high energy levels which meant he had pace, mobility and adaptability allied to all-round fitness.

Surprisingly, it wasn't Mr Carey (now departed for Everton) who gave McEvoy his Rovers debut but his successor, Dally Duncan. McEvoy's introduction to first team football coincided with Rovers’ first season back in the First Division in 1958/59 and it was towards the back end of that season that he lined up at inside left at Ewood, replacing Roy Vernon, against Luton Town. Rovers won 3–1 and McEvoy celebrated with two goals. The following season, again operating at inside left, he scored once in six appearances.

It was in season 1960/61, a quarter way through, that McEvoy forced his way into the first team, this time under the guidance of Rovers manager "Jolly" Jack Marshall, who had succeeded the hapless Mr Duncan (in the wake of the FA Cup Final debacle). McEvoy played 28 games, all at right half. Just as quickly as Andy McEvoy looked set to become a permanent fixture, he was back on the sidelines the following season – 1961/62 making only 12 appearances.

The 1962/63 season didn't augur too well either as the Irishman sat out the first half of the season only for Mr Marshall to play his trump card. Having already, the previous season, converted local boy Fred Pickering from left full back to centre forward with good effect and more significantly the maestro, Bryan Douglas from the right wing to inside left and playmaker/schemer, he stunned Ewood by giving Andy McEvoy his head by playing him at inside right not only to support Pickering but to benefit from the promptings of Douglas.

It was a masterstroke. Dubbed "Marshall's Misfits" by the national press, Pickering was scoring goals aplenty, 23 in 36 games in 1962/63, with Douglas chipping in with 15 in 41 but the new dimension of an explosive McEvoy ramped up the ante in 1963/64. Andy McEvoy became the complete goalscorer as he rattled in 32 goals in just 37 appearances. Pickering had 23 in 34 but by March of 1964 he was gone to Everton, with Rovers unable, but more likely unwilling to match his demands. The pain felt by Rovers supporters was immeasurable. With the club on the cusp of potentially taking the title, Pickering's sale blunted not only supporters' enthusiasm and expectations but Rovers title challenge.

Two games perhaps more than any give definition to the skills of Andy McEvoy. The first in September 1963 at Ewood against the magnificent Tottenham Hotspur. It was perhaps one of those once in a lifetime displays which saw Rovers outclass and dismantle the Londoners to such an extent that a rapt Ewood could hardly believe what they were seeing. The quality of football on display that day was textbook, the pace at which it was played, breathtaking. All nine goals were peaches, whilst both sides also hit the woodwork (Rovers once, Spurs three times). It was without doubt the most exhilarating display I've seen at Ewood Park.

Bryan Douglas was the architect but he had alongside him willing apprentices in McEvoy and Pickering. It was a game that defined the brilliance of McEvoy, who scored four of the goals in a 7–2 victory. If Douglas's display was a masterclass in vision and defence splitting passing, McEvoy's was a masterclass in the art of finishing – his 4th goal and Rovers' 6th is pictured above.

The second game was at Upton Park on Boxing Day in the same year – Rovers winning 8–2, with hat-tricks from Pickering and McEvoy. Douglas again was the master craftsman pulling the strings and everything about Rovers at that time revolved around the pocket genius. All this on a gluepot of a pitch. Again McEvoy produced a potent display of finishing including one goal in which he so disorientated Bobby Moore that the great man almost needed a ticket to get back into the ground.

McEvoy ended the season sharing top goalscoring billing with the best finisher I've ever seen, Jimmy Greaves. In that season of 1963/64, McEvoy scored five hat tricks (four in the League and one in the FA Cup).  The following season McEvoy, now with a new partner in John Byrom, scored 29 goals in 40 appearances. In Rovers’ relegation season of 1965/66 he played 31 games scoring 10.

1966/67 was to be the Irishman's last season at Ewood. Times they were a changing – Eddie Quigley had deposed "Jolly" Jack and with Rovers in the Second Division even the skills of Andy McEvoy were being tested. He scored 7 goals in just 14 appearances before returning to Ireland and joining Limerick. His last league game was at Ewood against Wolves in January 1967 in a goalless draw. His last goals were at Bristol City in a 2–2 draw, and, as in his debut, he scored twice.

Andy McEvoy's attributes were his pace from a standing start which was explosive (akin to a sprinter leaving the blocks), he could run from deep or play off the shoulder of the defender and it was his anticipation and the reading of that Douglas defence-splitting pass which marked him out too – it was football telepathy. His footwork was deft and being two-footed he was comfortable receiving and using the ball even in the tightest of situations. Once on the move his finishing was sublime and he possessed a skill you can't teach – he caressed the ball past the keeper, tantalisingly almost, but not quite within touching distance. Once delivered, and knowing instinctively that he had scored, he would wheel away in an arc – a thing of beauty.

Andy scored 89 league goals in 183 appearances for Rovers, including six league hat-tricks together with two hat-tricks in the FA Cup. His total tally was an impressive 103 goals in 213 games.  He represented the Republic of Ireland 17 times scoring 6 goals.

In my humble opinion, Andy McEvoy was technically the finest finisher I have seen in a blue and white shirt.