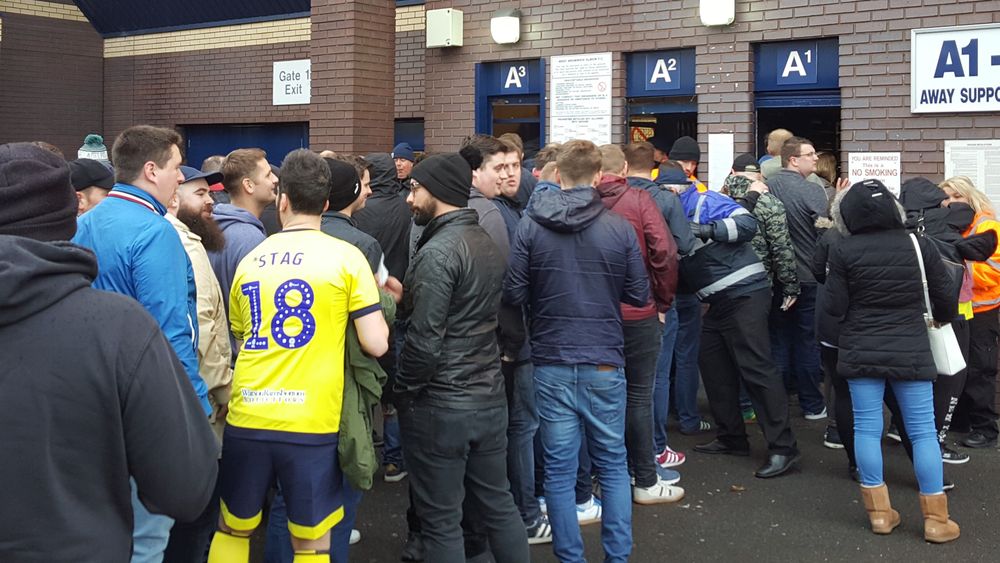 So you’re getting ready for the match, when you’re suddenly thrown into a blind panic because you can’t find your lucky shirt, socks, undercrackers or something else. Will it make a difference to what happens on the pitch? Almost certainly not. Do we have to turn the house upside down to find the damned thing, just in case it does (which it won’t, but just in case)? Hell yes!

Surely it can’t just be you that has these little foibles either? And if you find yourself pondering over such things (when there’s a very strong possibility you should be doing something more useful/ helpful/ important), what do you do? Well if you’re me, you ask Twitter. And rest assured kids, it’s not just you, there are a fair few of us out there that have our #RoversPreMatchSuperstitions:

You are what you eat

Heralding back to the era of Alan Shearer eating chicken and beans before a match, there are some of us, like Mandy Buck, that always have to visit the same butty shop (and order the same sandwich), those like Joshua Upton that always have to visit Greggs and others that need to eat a certain thing when they get to the ground – whether that’s a pie (looking at you Samuel Heyes) or always having to have chips at half time (just like Razina Umerji does).

Some plan ahead and make sure they always bring the same thing with them; ranging from a quarter of wine gums (for which we are to thank for us winning the league, according to Simon Harwood), never going to a football game without a packet of biscuits to hand, like Bruce Wilkinson and his mate, or if you’re Jim Haigh, ensuring you’ve got your Aldi cheese and onion rolls with you (to eat at the same time Razina’s scoffing her chips).

It’s not just limited to what you eat either… on away days for Richard Ennis, not even a sip of beer shall pass his lips before the coach sets off. And it’s against the law for ‘VtotheGee’ to use a Rovers mug on a matchday

If you see someone walking along Bolton Road doing a mighty fine Monty Python’s Ministry of Silly Walks impression, don’t take the mick folks, it might be another pre-match superstition. People have to go a certain way – if you’re Caroline it’s via Calico Street and Nuttall Street, Cory’s route is and always has been the same one and Jack Eastham never walks under road signs on the way to a match.

The building of a motorway knackered one such tradition, as Clare Nolan always used to pull faces at the speed camera in Wheelton/Withnell and it never failed, we won the league! But then they built the M65 in ’97 and they didn’t go that way anymore and it all went downhill from there!

And are there certain things we’ve got to do when we get to the ground? Of course there are: DollyDebz always has to go through a right hand turnstile, Simon Williamson always has to use the same turnstile he used the match before if we win (but this didn’t matter as much when King Kenny was in charge apparently!) and Chris Lofthouse always touches the seat where his friend June used to sit on the way up to his (after he’s got ready by always putting his left shoe on first, obviously).

Missing Elliott Ward anybody? Fret ye not if you are, the lucky charm for the Prescott family and co is a postcard of the Wardinator, who’s rapidly working his way through the 92.

You wear it well

Then of course, is the all important matchday apparel and by buggery we’re a superstitious bunch when it comes to what we’ve got on to see the Rovers lads play. Mandy’s got lucky socks, Richard’s wearing odd ones and our web'master' extraordinaire Warren Lucy has a lucky fleece that he tries to bring to every game (that’s why we lost at Plymouth in 2017/18 by the way – no fleece).

If you’re Gaz then you’ve got a whole outfit – brown top, brown jeans, brown sketchers and a wooden watch (bob on colour choice bearing in mind our current form in the last ten minutes of matches). Chris Horne always wears his 1990s Next watch; when the battery went, we appointed Kean by all accounts, but I have been assured that all is currently in working order and suggest that steps are taken to ensure similar calamities can never happen again.

Then sometimes, it’s not just what you wear, but how you wear it – if you’re Matt Sillitoe, our phenomenal Ewood Park PA Announcer, you’ll always turn up to a home game wearing a jumper over a shirt, then just before the 2.50pm away team/sponsors’ link you’ll have to take your jumper off and roll your sleeves up (and nope, Matt’s no idea where it comes from, it’s just something he’s always done!)

And then my personal favourite is Ian Herbert’s #powerpants! He has a pair of ‘football match’ undies, which can’t be worn on non-match days (apparently it just ‘doesn’t feel right’).

But what about the professionals?

The lucky shirt is sorted for them as they’re wearing our beloved blue and white halves, but we have a little insight about their #RoversPreMatchSuperstitions from five of our finest:

“For my pre-match meal I had scrambled egg and a poached egg – two eggs done in different ways. If we lost, I didn’t want to see the gloves that I wore ever again, even in training. They’d get sent off to charity or given to one of the younger lads.”

“Always went out 6th in line.”

“Changed superstitions all the time. Tried last out the tunnel, then eight. Right boot on first, then left. Same t-shirt under kit. Just a few to mention.”

“Always put my right sock on first, then right boot on before anything else. Always tried to do it coinciding with my favourite numbers – 10 past, 15 past or 17 minutes past.”

“I always put my shin pads and boots on my left leg/foot first. Then give myself a talking to before I take to the pitch.” And yes, I wanted to know what he said in the talking to. So I asked… it’s to “thank my family for supporting me, tell myself to give all I can and that everything I do is for my children.”