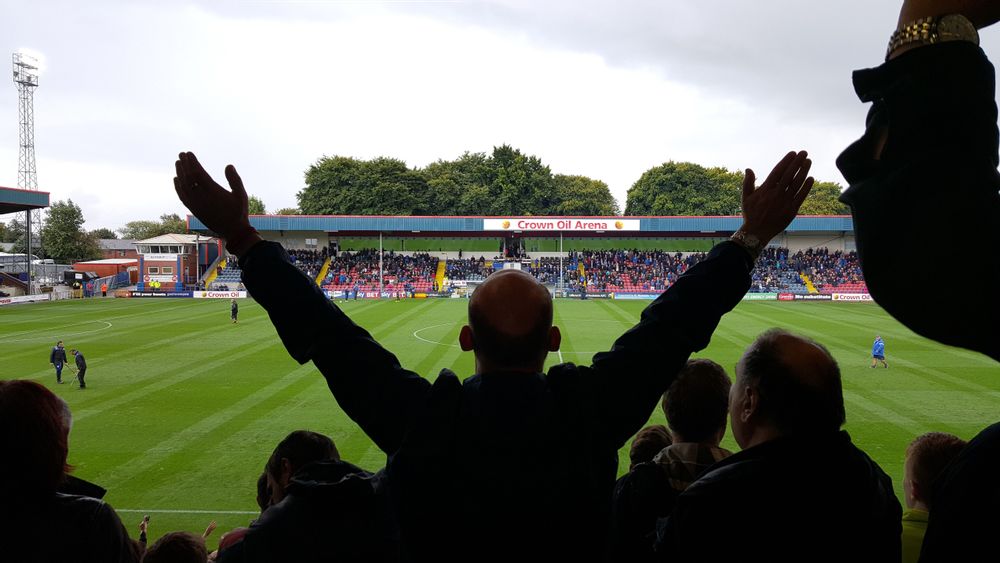 I was born in the North East, moved to Euxton at age 5, and Leyland at 10 where I spent my formative days as a Rovers fan. My Dad (and early days my Mum, brother and sister) took me to Ewood, Deepdale and Turf Moor. My first football game was in 1967 the season after Rovers had been relegated from the top tier. We played Hull City and won 4–1 with the recently deceased Mike Ferguson scoring two goals. I was hooked. I was also excited, so excited in fact that I could not make it to the ‘Gents’ in time (open to the elements like Euxton C of E school bogs, except at Rovers they did not have a competition to see who could pee over the wall onto the girls) and wet my shorts. It was freezing but I still walked to and sat in the car with my coat covering my large wet patch.

As I said I was hooked and Deepdale nor the Turf (even though Burnley were doing well and playing good football) could give me the same warm feeling I had at Rovers.

All my mates at Wellfield Comprehensive in Leyland were Rovers fans. This was surprising given it has always been a PNE town. Indeed I still see a number of them at games. These were the days of Brut aftershave (can you remember that overpowering scent?), multi-laced Doc Martens boots, two tone parallel pants, Fair Isle cardigans, Ben Sherman shirts and Crombie jackets with a red rose complete with tie pin to keep your silk hankie in place.... these were the attire of the Blackburn End and our set of lads from Leyland.

We caught the Fishwick special bus from Leyland to Ewood, looked around for girls to snog, and drowned as many high alcohol Barley Wines as we could from the refreshment stall on the Blackburn End. This was heaven, until Chelsea and then Bolton came to town and separated the men from the boys (us).

The 1974/75 season was, bar 94/95, my favourite. Bunking off school for away games far afield, and culminating in that famous away game at Port Vale when we won 4–1. It was five times on the pitch, once for each goal then at full time. We even had the joy of Matlock Town away in the FA Cup with goals from the mercurial Don Martin (he had my scarf from the final home game versus Wrexham), two from Ken Beamish and another from Tony Parkes. The back wall of the cricket pavilion was an impromptu gents toilet for the thousands of Rovers fans.

My favourite game that season was Plymouth at home. It was February and they were top and us second. Thousands of Plymouth fans arrived by breakfast time to allow their coach drivers rest time for the return journey. They literally painted Blackburn green with spray paint all over town. In the first half we went 2–0 down and Rovers missed a penalty. We then witnessed a remarkable turnaround of epic proportions winning 5–2 to the disgust of the Plymouth hordes – who left quickly.

Growing up, getting driving licenses and fed up of overzealous coach drivers, we turned to a tranny. A Ford Transit van not the local transvestite. This was the vehicle of choice for Rovers fans from various towns and we often bumped into similar from Wheelton, Brinscall, Accrington etc. Seating for three at the front and in the rear it was covered in cardboard and old cushions for the other 10 to 15 to sit on whilst supping copious amounts of lager and Watney Red Barrel. We even sussed out that the tranny had a rubber bung in the back that you could remove and place your tool through in order to have a pee whilst on the move (the passengers not the driver); we had many happy away days with our trusty tranny which always culminated in turfing out around 100 empty beer cans and bottles at the end of our return journey.

Leaving Home and Moving On

I left home to join the Merchant Navy at age 16. There were no mobile phones, no internet nor email and the only contact I had was a week’s old Blackburn Times once every few weeks to keep up with the scores. It was a nightmare keeping in touch and I lost touch. After six years I was homesick and went home to work at Leyland Motors on the production lines then in foundry maintenance – I had got my Rovers mojo back!!

Redundancy came along and I took a chance and moved to London followed by many years as a nomad in Bristol, Surrey, Doncaster, Tewkesbury, Stratford-upon-Avon and Oakham. I saw many away games and always took in the home games whilst visiting family.

Life has its challenges and relationship challenges. I was living with a girl in Oakham, Rutland and having a wee fling with a lass in East London. Rovers played West Ham away, I bought a ticket and also played away. After an afternoon of tantric sex I returned and gave an excellent review of our 2–0 defeat thanks to the report on Radio 5; thank goodness I did not go on the game. I also soon moved to Doncaster.

These thankfully have been less traumatic. I have moved back to Lancashire, settled down, had a season ticket for many years (bar two of the worst years under the Venky’s) and am spending my latter years enjoying the company of friends and acquaintances at Ewood and many away games. We still have a lads away trip for a long weekend every season but we may need to knock that on the head as we always get hammered (the team and the lads).

I have some fantastic memories of which the above are only the very briefest snapshot. Indeed as I write this many are flooding back. Maybe another ramble will follow, if so it will include the ‘love train’ football special to Leyton Orient. That was a day to remember for many reasons.