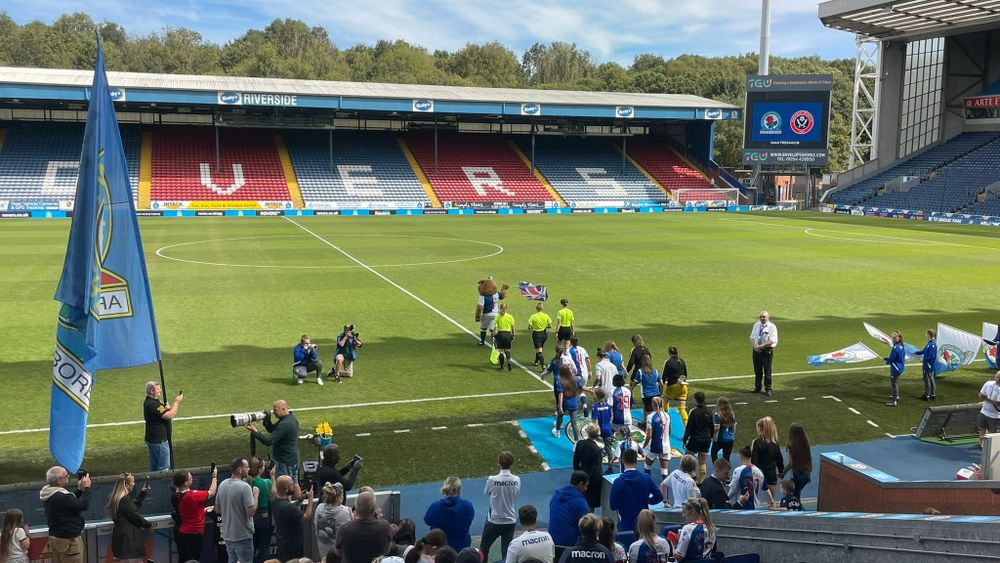 It’s easy to be critical, I should know as I spend a lot of time doing just that, but there’s a couple of things I wanted the club to pursue this summer off the field:

Whilst they may have been low hanging fruit, they had to be picked and I’m really glad to see us take both opportunities.

BRFCS.com proudly sponsors Saffron Jordan and we were invited along to watch the game, together with the other sponsors in the Directors Lounge on Sunday. I was lucky enough to go with my daughter Arabella, aged 6, who had told me after the Lionesses' triumph that she wanted to go and watch Rovers…“But only the girls…"

It's great credit to the club for bringing the women's team to Ewood for the opening fixture of the campaign. Jane Parker, General Manager of the Ladies team, told me that they always wanted to have this game at Ewood Park but had to wait on confirmation of the Carabao Cup fixtures first, which accounted for the relatively late notice.

With tickets priced at just £5 for adults, £2 for children and concessions, and £10 for a family ticket, it was good to see the family stand looking full with a good turn out all hoping for a tonic to Saturday’s humbling against the same opposition. I was never going to get through this mini report without reference to “football coming home” but I didn’t expect it to be in such an iconic manner. The team brought home all 3 points with an almost perfect “away” performance, one that Jon Dahl Tomasson would have killed for on Saturday. Backs to the wall for the most part with some resolute defending and the one real chance landing to and expertly taken by the perfect candidate.

From the outset Sheffield United were intent on taking the game to Rovers, with Alex Brooks in the Rovers goal having to make a couple of routine saves from Courtney Sweetman-Kirk before Chene Muir advanced and struck the woodwork from outside the box with the keeper well beaten. The counter attack looked like Rovers' most likely route to goal in the first half with two Sheffield United corners resulting in Rovers breakaways led by the marauding full back Faith Nokuthula, who like her male counterparts looked much more in her element attacking than defending, and the ever willing Farah Crompton. Whilst the attacks were ultimately thwarted it was a reminder that we could be a threat.

A couple more Sheffield United chances came to nothing with thanks to some solid defending including a great Helen Seed block and as half time loomed and you have to feel Gemma Donnelly would have been quite content to take the 0-0. A clumsy Sheffield United challenge on halfway line provided an opportunity for one last attack of the half. Tash Fenton hopefully floated a ball into the danger zone and the defence and keeper were caught in two minds as the diminutive and let's be open here, BRFCS's own Saffron Jordan was ‘Saffy on the Spot’ to loop a header over the keeper to give us a slightly unlikely lead at the break.

That set the tone for the second half. Rovers had a lead to protect and Sheffield United had to go for it. A couple of early changes for the visitors saw a bit of early pressure but the chances they did create resulted only in strikes off target. A shout out to Niamh Murphy, who was introduced on the hour for Rovers and shone, her energy and tenacity down the left was a welcome boost and she was a real thorn in the side of the away team both in attack and defence and played a big part in Rovers weathering the storm without too many scares (apart from a couple of penalty scares that thankfully the referee waved away).

There were great scenes at full time as the girls spent a good half hour meeting and talking with the fans. The battling performance and brilliant result almost felt secondary to the fact that there is real hope that a new generation of young girls will have more visibility of players in their likeness and heroes of their own.

Rovers hope that there will be a few more fixtures like this at Ewood this season. Arabella and myself will definitely be back and I really hope it becomes a regular occurrence and we see even more fans down at Ewood cheering on a team of girls that give everything for the famous blue and white halves.