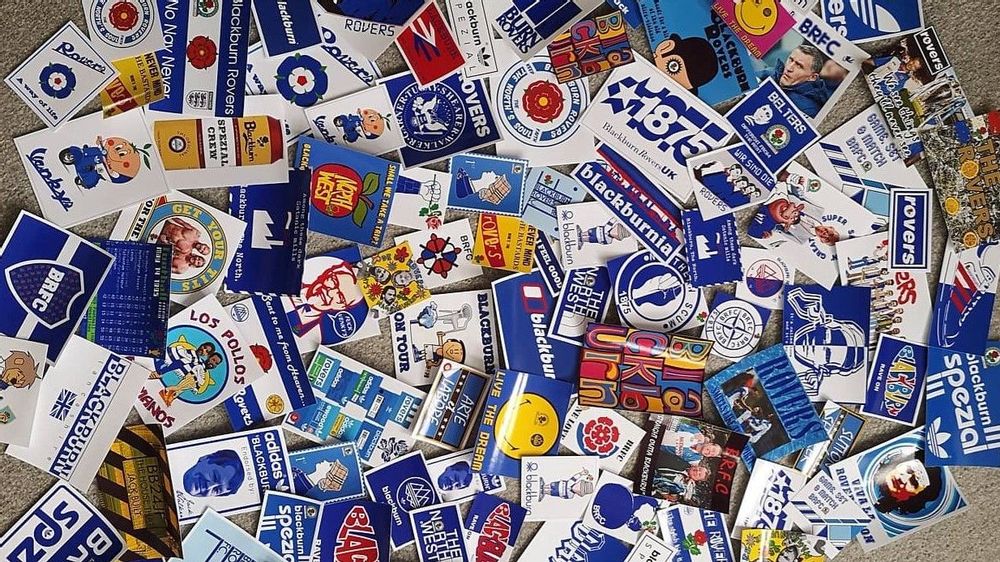 We might not have been at the top of football for a while now, but Blackburn Rovers fans are leading the way in one aspect – pop culture groovy stickers. You might have spotted them on lamp posts, concourses, railway stations and probably a few dotted around college campuses – bright, witty and often works of genuine creative inspiration.

Every club might be represented with all kinds of design, some of the most predictably dull are just the name of the club across a crude cross of St George, bearing a passive aggressive grunt of identity, something like ‘Nelson Clarets’ or something.

But the handiwork of one crafty graphic designer – to be found on Instagram with the moniker plagiarism begins at home – has taken sticker culture to a whole new level. Though he designs to order for fans of other clubs, his Rovers work is absolutely peerless and displays his deep knowledge and love of Rovers and of music and culture.

There's long been a really strong current of music and fashion that cuts into the Rovers fanbase. Riversider Gary Aspden's work with the Adidas street brand Spezial and the stunning exhibition of footwear at the Blackburn Cotton Exchange really cemented that. Now that he’s managing home grown band the Illicits, the live music scene in the North hasn’t had such a powerful crossover with Rovers fan culture since the days when New Order were well supported by the town’s youthful element.

There are also some great crossover flags that celebrate those musical and fashion ties. Those of us with long memories can recall that the rave scene in the early 90s took the direction it did with massive input from the Blackburn area, so it's great to see this visually represented in colourful and brilliantly designed stickers, brightening up many a dull space.

Here are a top five from a crowded field of genuine excellence.

The Jack Walker Spezial – inspired by the design on the Adidas classic Stan Smith plain white tennis shoe, one day this will also be a branded shoe.

Rovers–Hibs – the strong bond between the two clubs formed in the same year and celebrated in this elegant simple design, using the font from the 1977 programme when the two sides met in the Anglo-Scottish Cup.

Movement – the design on New Order’s iconic second album was inspired by the Italian futurist movement, this adaptation incorporates the club’s rose and faithful elements of the original.