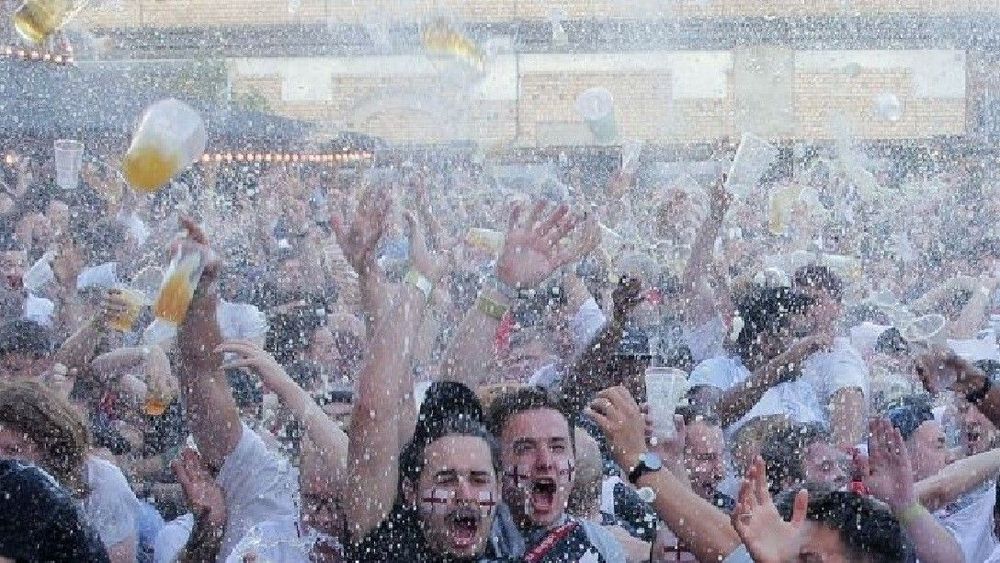 Support as Performance - not everything is a 'mental'

England’s 2018 World Cup run may have a lot to answer for. As Southgate’s men progressed through the tournament, scenes of people going mental – with limbs all over the shop – went viral. Harry Kane’s last-gasp winner against Tunisia was the perfect launching pad for these videos, as we laughed and smiled at the pandemonium in Leeds, Croydon, Newcastle and Manchester.

Those 30-second moments of utter jubilation were right for that Kane header. England were the better side, should have had the game wrapped up but just as you were about to say ‘typical England’ and write us off again, Kane nodded in just when it seemed like England were at their most typically English. Cue limbs. Pints in the air, sheer uncontrolled mayhem. Football.

What happened after was great – England won games, and reached an unexpected semi-final, but it didn’t stop the viral #scenes machine continuing. By the end of the tournament, they’d become somewhat formulaic – England score, pints go up, arms are waved about and when the cameras turned off everyone was soaking wet and down five quid. But was it really necessary for a shower of sticky hoppy sludge to accompany, for example, the third goal in the rout of Panama?

It feels as though the big-screen gatherings watching England were determined to outdo each other for that ‘viral’ moment. Who could do a mental the best? Would it be BoxPark Croydon or Propaganda Leeds? It became less about what the goals actually meant, but what it looked like the goals actually meant. By the mid-week semi-final against Croatia, England was out of energy – and out of beer.

So, does this have anything to do with a girl getting hit by a pie at a Sheffield Wednesday v Stoke game? Most likely not, but it feels like a lot of what entails supporting your club today involves a level of performance. First of all, you need to be seen to be at the game to ensure you have your fan credentials in the first place. Expressing positivity or negativity after your team’s game online these days can land you a response along the lines of “Well, did you actually go?” or “Well, if you’d have been to the match, you’d have known…”. Even if you consumed the entire game on television, accessing more angles, replays, in-match data – the truest of the true opinions come from those in attendance.

Yet even if you overcome step one there seems to be a pressure to be ‘part of something’ when you’re at away games in particular. Thou shalt sing, thou shalt stand throughout the entire game (sorry gramps), thou shalt consume ridiculous quantities of alcohol that’ll either put you to sleep or in prime dickhead mode once the match kicks off. If we score, you have to go mental. For the scenes. For the scenes with the lads on the awayday. It’ll be class.

Constant fancams, and Twitter accounts dedicated to the spontaneous combustion of football supporters are helping to fuel this. Just look what it means to them. If you didn’t hurl a pastry at a fellow supporter, did you even go?

This is not to downplay the joyousness of the justified ‘mental’. The memories of going absolutely bananas will stay with us forever. What makes them special though was there was nothing forced about them – it was a pure release. A first half goal in a run of the mill league game may make you scream and jump up and down in delight, but if you can’t control your pie in that situation I worry for you.

Football is incredibly personal. I know people who go to games and barely make a noise, I know people who don’t go to games and tear their living room apart when we score, there’s the people who watch it because they’re fascinated by football, and people who solely go for the day out – having beers with their mates. All are equally valid ways of spending a Saturday afternoon, but when the way you support your club infringes on someone else’s support, it becomes a problem. Especially when it seems not to come from a genuine place of emotion, but of acting up to impress your mates, strangers, or the followers of @LimbsAndScenesAndMentalsViralBible.

There will always be dickheads who go to watch football, and indeed being treated like dicks by over-zealous police and ridiculous measures around alcohol in turn only create more problems – but I can’t help but wonder if social media is helping fuel a kind of attitude that says: This is how to be a football fan, because it just isn’t.

Having a full, vocal away section is a fantastic thing for any club, and the last thing I want is scores of Arsenalesque golf crowds – but is it worth the increasing number of fans who say they cannot or will not take their young children to away games? It is possible to enjoy the football and not be a dick about it. But I guess kids having a nice trip with their mum and dad doesn’t help create a good mental.

*This article was originally in Issue 94 of 4,000 Holes. Please support the continued existence of the fanzine by considering a subscription or buying the occasional copy. It is much appreciated by all of the writers. Thank you.