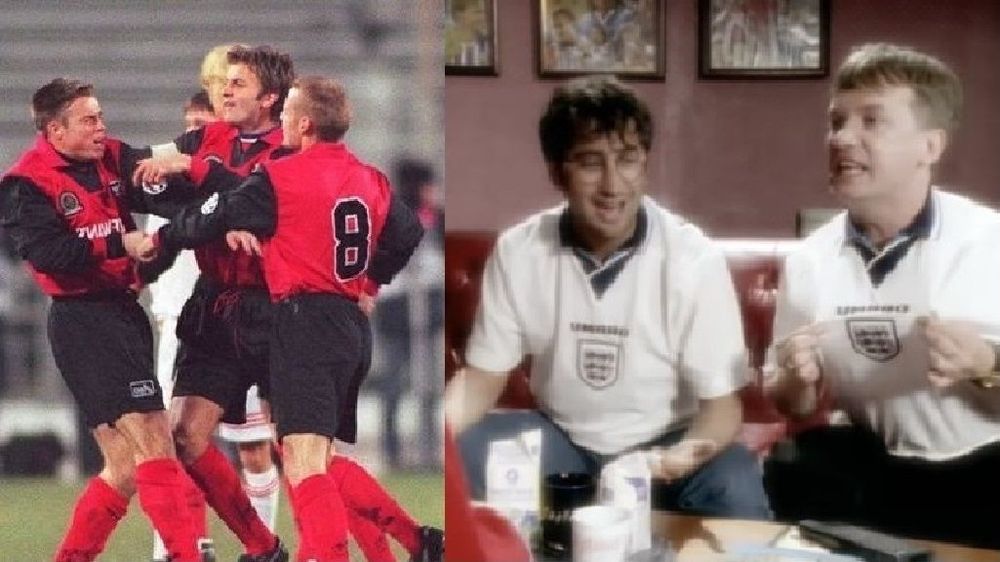 As England's World Cup campaign continues, we'll increasingly hear the phrase “Football’s Coming Home” uttered – even though the expectation was finally met this year thanks to the Lionesses’ success at Euro 2022.

And despite now being over 25 years old, the famous Euro 96 track ‘Three Lions’ by David Baddiel, Frank Skinner and the Lightning Seeds will inevitably still be played on repeat during all future tournaments. A new version was even released for Qatar 2022.

Baddiel recently clarified the song’s meaning for those assuming it reflects English arrogance: “It’s about how we mainly lose but still irrationally believe that this time, hope might triumph over experience. It’s about yearning and magical thinking. It’s about the condition of being a football fan. Admittedly people have taken Football’s Coming Home to mean all sorts of bollocks.”

The hope and expectation is nowadays much greater than it was upon the song’s release in the 1990s, when England had hit a low point. On The Athletic’s excellent ‘Football Cliches’ podcast, host Adam Hurrey embarked on a needle-in-a-haystack quest to find the original audio clips of the punditry from that time which make up the intro to Three Lions.

Commentary samples used later on, when the song is more upbeat, are fairly familiar: "England have done it in the last minute of extra time!" is John Motson on David Platt's last-minute goal against Belgium in the 1990 World Cup; and "What a save! Gordon Banks!" is David Coleman on the incredible save from Pelé's header in 1970.

However, the pessimistic intro remarks are much more obscure. If you need a reminder, Alan Hansen, Trevor Brooking and Jimmy Hill provide a withering assessment of the national team’s chances:

"I think it's bad news for the English game."

"We'll go on getting bad results."

But what specifically was the ‘it’ which Hansen was referring to? It could conceivably have been spoken in response to any number of things – from the Bosman ruling to various scandals in the mid-90s (match fixing, Cantona, Arsenal bungs, Lansdowne Road riot etc). The likeliest suggestion would be England’s failure to qualify for the World Cup in 1994.

However, while the Graham Taylor era had most recently contributed to the negative outlook for national side, it was also the failures of club teams in European competition which completed the picture.

Manchester United had been twice dumped out of the Champions League before Christmas and then lost to Rotor Volgograd in the UEFA Cup 1st Round in 1995/96, despite a late Peter Schmeichel goal in the second leg.

Other English representatives in 1995/96 included Liverpool, Leeds and Everton, who all had Round 2 exits in Europe. Incidentally, the familiar “Wey-oh, [thunderclap], wey-oh, [thunderclap]” opening to Three Lions is actually the sound of the tremendous Brøndby fans at Anfield in the UEFA Cup, which was recorded on a cassette by Ian Broudie of the Lightning Seeds.

No big reviews are needed of what happened to Rovers in the UEFA Cup and Champions League, but while we’re regularly reminded about the Trelleborg and Spartak Moscow embarrassments, it was merely typical of the uncompetitive nature of English teams at that time.

Nottingham Forest – who finished third when Rovers won the league – were the only English club to put together a respectable European campaign in 1995/96, reaching the quarter-finals. In the season when Rovers beat Forest 7–0 and 5–1, it was Bayern Munich who went to the City Ground on 19th March 1996 and came away with a 5–1 victory to end English clubs’ involvement in Europe.

That second leg match was shown on BBC1 and the chastening 7–2 aggregate defeat allowed Alan Hansen to get stuck in with his post-match analysis. And the answer to the question lies within:

“Bayern played well in the second half, but it’s so much easier to play when you’re three-nil up and four-nil up. On a wider context, I think it's bad news for the English game. The result tonight and the performances in Europe make a mockery of the people that continually say that we’ve got the best league in the world.”

Where do the punditry quotes at the start of Three Lions come from? 25 years on, the 𝗙𝗢𝗢𝗧𝗕𝗔𝗟𝗟 𝗖𝗟𝗜𝗖𝗛𝗘𝗦 podcast finally has the answer...https://t.co/rgaEtVzHfm

It’s very strange to listen to the quotes in their original context after hearing them hundreds of times before whenever the song has been played over the last few decades. The familiar cadence of those words jump out like when you randomly come across the original track from which a modern-day hit has used a sample.

The search for the origin of Trevor Brooking’s “We're not creative enough…” remains elusive, but it is most likely from the co-commentary of an England match between 1994 and 1996.

So just think: if Rovers had somehow managed to reach the latter stages of the Champions League with Alan Shearer as the competition’s top goalscorer, Hansen and Hill probably wouldn’t have been able to go full throttle with an attack on the English game – and those iconic lines at the start of Three Lions might never have been uttered.

*A version of this article was originally in Issue 101 of 4,000 Holes. Please support the continued existence of the fanzine by considering a subscription or buying the occasional copy. Thank you.