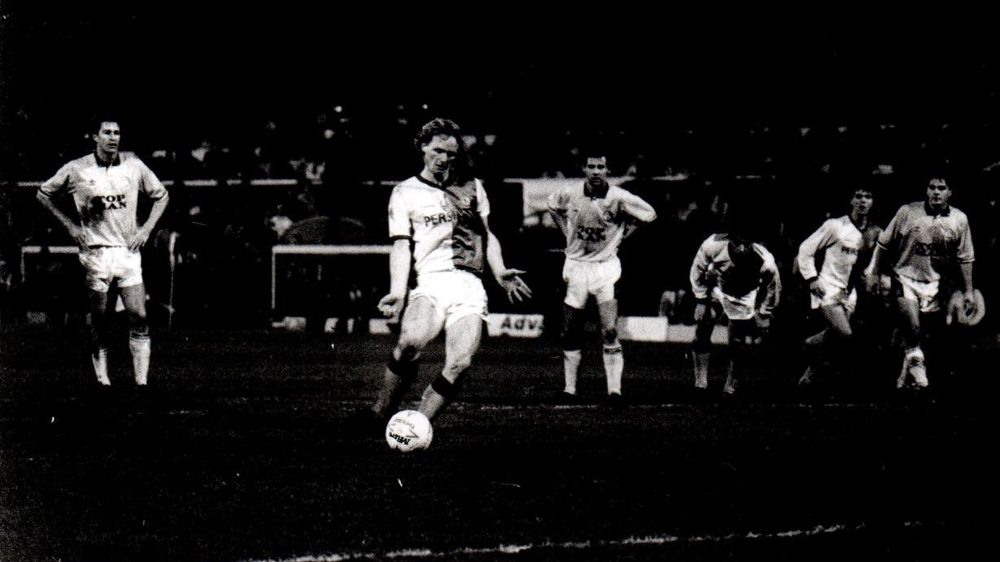 Rovers missed a golden opportunity to claim a point against Cardiff City on Tuesday when George Hirst failed from the spot – the third crucial penalty miss in 2022 after Reda Khadra and Bradley Dack both missed late on earlier in the year. Here’s a rundown of some of the most famous spot-kick failures in the club’s history.

1. John Coddington v Crystal Palace (H), March 1968. With a trademark run-up from way outside the penalty area (which had proved effective in his Huddersfield days), centre-back Coddington found himself knackered after wading through the Ewood quagmire and tamely passed the ball to the keeper. Incredibly, the referee spotted an infringement and allowed him another chance. Coddington then performed a perfect re-enactment of his miss.

2. Howard Gayle v Crystal Palace (H), May 1989. Gayle had already scored twice and won the penalty in the first leg of the play-off final, but he placed his kick agonisingly wide of the right post. Rovers painfully lost 4-3 on aggregate – how might things have turned out if Rovers had led 3-0?

3. David May v Leeds United (H), January 1990. Perhaps it’s unfair to pick out a defender in a season when seemingly every player was trying and failing to score a penalty. Terry Gennoe was apparently next on the list to volunteer but May cleared the Blackburn End roof on his turn.

4. Jeff Kenna v Newcastle United (H), December 1998. Many things went wrong when Rovers were relegated in 1998/99, but perhaps the most surprising event was goal-shy full back Jeff Kenna rising to the top of the list to take penalties. In Brian Kidd’s first proper game in charge, Kenna hit the post in this goalless draw.

5. Lucas Neill v Sheffield United (A), September 2006. Clearly taking inspiration from Kenna, Neill decided he wanted to be on penalty duty and successfully scored in the famous 4-3 win over Manchester United. However, he went on to miss his next one at Bramall Lane on the day when Brad Friedel saved two penalties from the home side.

6. Benni McCarthy & Jason Roberts v Bolton Wanderers (H), October 2006. Iván Campo headed in for Wanderers but Rovers had two big chances to equalise in added time. The normally reliable McCarthy saw his penalty saved by Jussi Jääskeläinen, but ref Mike Dean didn’t bottle awarding a second penalty in the immediate aftermath. Substitute Roberts had won it again and swiftly grabbed the ball, only to have his effort saved too.

7. Junior Hoilett & Mauro Formica v Everton (H), August 2011. You want more double-penalty heartbreak? Formica won two penalties in the second half – Hoilett had the first saved and Formica hit the post with his. Then Lee Mason controversially ruled that Chris Samba had flattened Marouane Fellaini in injury time and Mikel Arteta netted the winner from the spot. A third successive defeat started the 2011/12 relegation season.

8. Marcus Antonsson v Northampton Town (A), December 2017. Howard Kendall recorded a club record eight successive league wins during the 1979/80 Third Division promotion season. That record was on the horizon at Christmas after six wins on the spin, but Marcus Antonsson took a feeble 84th-minute penalty at Sixfields resulting in a 1-1 draw which ended the sequence.

9. Reda Khadra v Sheffield United (A), February 2022. Rule 1: Rovers don’t score penalties at Bramall Lane. Rule 2: If Rovers miss a penalty at 0-0, then the opposition are obliged to score a winner in added time.

10. Bradley Dack v Bristol City (H), March 2022. There was to be no fairy tale return for Rovers’ returning talisman after exactly 365 days out of action as Dack gave Dan Bentley a simple save with a weak effort towards the middle of the goal. Meanwhile, Bristol City got the memo about Rule 2.