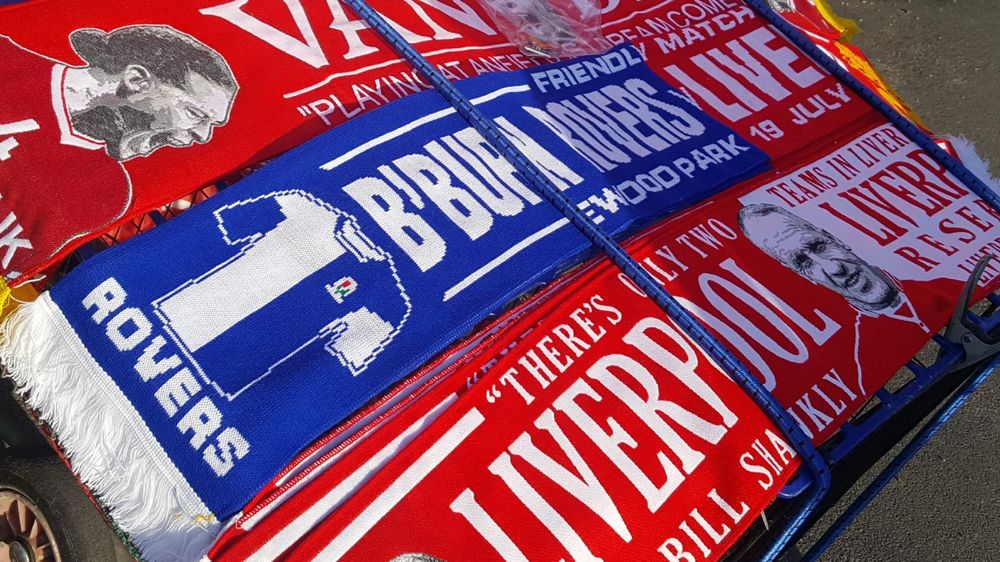 Ah, half-and-half scarves. The scourge of modern-day fan culture. Why would anyone want to spend £7 on a City v United scarf, let alone want to be seen wearing it in the stands alongside fellow fans of their beloved team? But is there any defence for half-and-half scarves or do they deserve the near-universal derision they currently get?

The Rovers v Liverpool friendly in July 2018 saw mass sightings of half-and-half scarves along with the usual disgusted backlash from so-called “real” football fans. In fact, I saw a family of four from Germany each adorning a Rovers/Liverpool scarf over their Borussia Dortmund shirts – obviously swept up in Jürgen Klopp fever.

Beyond neutral tourists from Germany – or more commonly the Far East – it’s bizarre that a regular partisan supporter would want to buy and wear a scarf for a regular fixture which happens every season such as a Manchester derby.

But I’m arguing for a certain degree of acceptance of half-and-half scarves as a memento of more significant and unique events – such as a non-league team getting an FA Cup tie against Arsenal, or Walsall beating Ajax. Some people say “just buy a bloody programme if you’re so desperate for a memento!” but a scarf makes for a more versatile type of item which you can proudly hang in your house or actually wear at matches in future.

As a small-time collector of Rovers programmes, shirts and miscellaneous memorabilia, there was a time when I’d scour eBay and consider purchasing any item bearing the name of Blackburn Rovers – no matter how obscure. Caught up in the excitement of a glorious European Thursday night against Red Bull Salzburg, I found myself tempted by a scarf seller outside the ground. I just saw it as part of a celebration of a great achievement in reaching a prestigious European competition.

And then – for the first time in our history – we actually had a degree of success on the continent after coming through that tough first round tie before topping the group of five in the next stage. The second scarf is a unique piece of football memorabilia as you’ll ever find: when will Rovers, Feyenoord, Nancy, Basel and Wisła Kraków ever appear together in a competition again?

Based on previous European performances, I presumed that the first couple of rounds would be as far as we’d progress and I wasn’t considering the possibility of having to fork out money on a full UEFA Cup run. In retrospect it would’ve been a hell of a good collection to own if we’d gone all the way but my scarf-buying could already be considered “extreme” and I didn’t bother purchasing a Bayer Leverkusen one (where we sadly met our exit, of course).

Now that it’s over 10 years since we last competed in Europe and given that it might well be at least another 10 before we do so again, the scarves are still something to look back on with pride (and occasionally cry into when we’re losing at home to Doncaster Rovers).

I’m not sure if I’ll ever buy another half-and-half scarf again, but I’m always open to the possibility if something noteworthy comes along in the future.

A quick eBay search reveals a “Rare vintage Chelsea/Blackburn football scarf” from the 2007 FA Cup semi-final at Old Trafford. That doesn’t enter into the realm of an acceptable purchase for me – and not just because in hindsight I know that we lost the game. However, if we’d got through I’d definitely have considered buying a Rovers/United scarf as a memento of the first FA Cup Final at the new Wembley that year – regardless of the eventual score.

There’s actually another Chelsea/Rovers scarf on offer. In fact, it might even be deemed a collector’s item in a couple of decades given that it commemorates Rovers’ last game in the Premier League in May 2012. It’s only £1 plus P&P but I think I’ll still pass.

Scrolling further down the list, there’s a generic undated United/Rovers scarf but that’s not being bid on purely because of the sick-inducing product description of “Half and half friendship scarf”.

And there’s even a Wolves/Rovers scarf for “Match 14 of 19” of the 2011-12 season. It’s quite beyond me who out there would be intent on buying a scarf for such a nondescript match – or indeed completing the “Molineux home collection 2011-12” – but if that’s what turns you on then good luck to you.

Maybe there’s something in all of this saga for the young kids in terms of a “first match I ever went to” memento, but personally my Rovers v Kettering Town programme from January 1992 does the job just fine thank you very much. Regardless, I doubt there were any such scarves available to buy outside Ewood then, given that the half-and-half scarf boom is only a relatively recent trend.

So there’s clearly a lot of stony ground for the true scarf connoisseur – especially if you want to avoid disapproving looks around the stadium. I certainly don’t look down on anyone indulging in buying a scarf of their own choice – each to their own and all that.

But personally, I’ll maybe limit myself to obscure once-in-a-lifetime type matches. And just like with football programmes there’s always the opportunity to assemble a collection using eBay and the like. I’m almost tempted to build the complete Blackburn Rovers in Europe scarf collection now. Which leaves just one question. Just how many Rovers/Trelleborgs scarves survived the mass burning of memories from our infamous first foray into Europe?